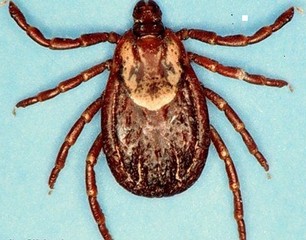 Ticks are external parasites that feed on the blood of host animals such as dogs. Ticks are 8 legged parasites that belong to the spider family arachnids like mites and spiders. Rhipicephalus sanguineus  (The brown dog tick), Dermacentor variabilis ( the American dog tick)  and, Ixodes scapularis (deer tick or black legged tick): examples of ticks that commonly affect dogs, require  three feedings to complete their life cycles.
Ticks are visible to the naked eye and are most active in warm climates from spring through fall, they are living in grass and  wooded areas where they may attach to dogs playing on their turf. Tick infestations can be anywhere on a dog’s body, but commonly close to the head, neck, feet and ear area. It’s a good idea to check your dog regularly for these parasites particularly during the warmer months. Since it may only take a few hours for disease to be transmitted from an attached tick, take your dog to be evaluated by a veterinarian if you find any tick
life cycle of ticks includes  several stages – larva, nymph, and adult.  Species such as the Deer Tick can transmit diseases in their larval and nymph stages.
Ticks can transfer many disease to their host animal such as,
In addition to all abovementioned tick borne diseases, ticks can also cause anemia, tick paralysis, Skin irritation and inflammation.
Read More