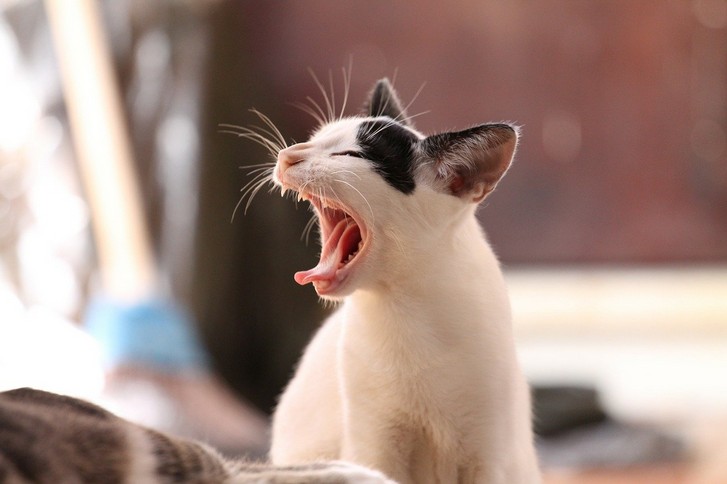 Many diseases are species specific.  That means that in general, you won’t share an illness with your pet.  Some diseases, however, are zoonotic. That means that they cross species barriers – they are things that you can catch from your pet.  Zoonosis occurs when bacteria, parasites, fungi or viruses are transmitted to humans through blood, saliva, urine and feces. Diseases can be transmitted through vectors as well – intermediaries like mosquitoes, fleas and ticks.
Bacterial Infections
The most common bacterial disease transmitted from cats to humans is Bartonellosis, or Cat-Scratch Disease (or Fever). People usually get bartonellosis when they are bitten or scratched by an infected cat.  Fleas and ticks may also transmit the disease. Symptoms include swollen and inflamed lymph nodes (mostly around the head, neck and arms), headache, fever, lethargy, loss of appetite, and achy muscles and joints. Healthy people will generally recover well, although it may take several months to be completely free of the disease. As with any illness, people with compromised immune systems are at risk of more severe infections and complications that in rare cases may result in death.
People usually get salmonellosis from eating food contaminated with salmonella. Cats who eat raw meat or wild birds can transmit salmonella bacteria in their feces. Symptoms include fever, diarrhea, and stomach pains that occur within one to three days of infection. Salmonellosis usually resolves on its own, but serious cases will need medical attention.
Parasites
Parasites include internal and external varieties.  External parasites include fleas and ticks, which can be vectors for zoonotic diseases as well as causing inflammation and itching from bites.  Internal parasites include roundworms and hookworms, which are transmitted through contact with infected feces.  Depending on the worm, symptoms can include vomiting, diarrhea or bloody stool – which can sometimes contain the worm – as well as shortness of breath, lethargy, nausea, stomach pain, loss of appetite, weight loss, rashes, and a cough or difficulty breathing.
Internal parasites also include protozoa, which are single-celled organisms. Cats often pick up the protozoans from eating infected birds or rodents, and can also get it through fecal contamination from another cat that is infected.  People can pick up the protozoa when they clean their cat’s litter box, so make sure you wash your hands thoroughly after dealing with any pet waste. The most common protozoal diseases transmitted to humans are toxoplasmosis, giardiasis, and cryptosporidiosis, all of which mainly cause diarrhea. Immune-compromised individuals may develop a more serious illness and need medical attention.
Fungi
The most commonly seen zoonotic fungus is ringworm. It often develops in environments with a large number of animals living together. Despite the name, ringworm is not actually caused by a worm. It is a fungal skin infection.  Humans can get the infection from handling an infected animal. The fungal spores are often dropped on shed hair and skin cells, so you don’t necessarily need to touch the affected skin directly. Cats and humans have different reactions to ringworm. Cats develop a grey, scaly, dry patch of skin.  People will often get a round, red, scaly, itchy lesion.
Viruses
Most viruses are species-specific, which means that a cat virus will travel amongst cats, but not transfer to humans, and human viruses will travel between humans but not affect cats. The primary zoonotic virus is rabies.  It affects every warm-blooded species, and can be transmitted to a person if they are bitten by an infected animal. Cats are very vulnerable to rabies. It affects the central nervous system, and is generally fatal. Humans are a bit more resistant and have a higher survival rate, but the virus can cause permanent damage. Post-exposure vaccination can help stop the disease if your cat has been previously vaccinated against rabies, but once symptoms occur death usually follows within ten days. There is no treatment for rabies. In most of North America, vaccinating your pet – even strictly indoor cats – is legally required.
Prevention
If you have a compromised immune system, it is recommended that someone else clean up after your pet.  Even completely healthy people should take precautions. Vaccinate your cat, keep their food and water dishes clean, avoid directly handling used litter and clean the box completely at regular intervals. Wash your hands thoroughly and often, and keep your cat indoors.
If you have questions or concerns regarding zoonotic diseases, call our veterinary clinic in Newmarket Aurora area at 905-898-1010. Our veterinarian in Newmarket is happy to help you and answer your question.
Sources:
Rabies in Pets
What Can I Catch from My Cat?
CDC: Healthy Pets, Healthy People